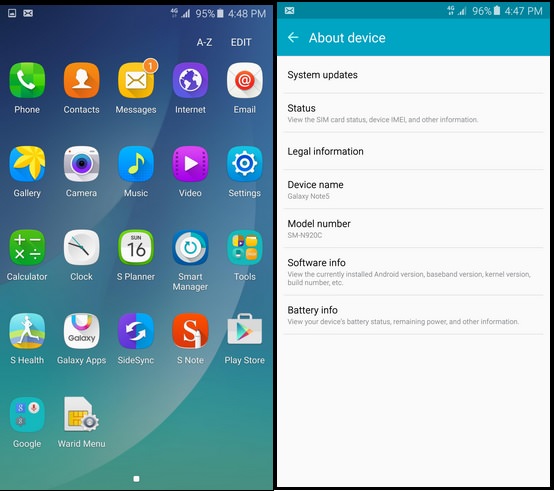 Note that developers have already ported many apps from Galaxy Note 5 which is already in the market. You can download and use those ported apk from Note 5.

Samsung’s TouchWiz launcher does not changes rapidly rather they love to change it in a slow way. This new TouchWiz is quite similar the Galaxy S6 but features some new icon and a new User Interface.

How To Install Galaxy Note 5 Launcher

1. At first you have to download the launcher apk file of Galaxy Note 5 from above

2. Now, you have to extract the zip file that you have downloaded from above.

3. Open the extracted folder and You will get two files : Lib folder and the Note 5 Launcher apk

4. If you have downloaded this in commuter then transfer it to your mobile

5. Now, you have to use a file explorer which will have root capabilities. After that you need to go to the system/priv-app/TouchwizHome_MR1. You need to take a precaution by taking the backup of current APK file. Now replace it with the Galaxy Note 5 touchwiz apk file. This should do the work, however, if it force closes then you need to copy the new libs files also.

6. We are down with the work, now reboot your devie

7. Voila !!! You now have Galaxy Note 5 Touchwiz launcher in your phone.

Just in case if you don’t like the new interface of TouchWiz you can always go back to previous by using the apk we took a backup on step 5.