Ironhide game studio came up with a new defense based game. It is named as Kingdom Rush Frontiers.  This is a charming,interesting,addictive type of game which will take most of your leisure time. kingdom rush frontiers will allow you to use different type of tower defense strategies and techniques. There are different types of maps in this game as sometimes you have to hold the defense in desert,Greenland,jungle or even in underworld. There are different types of enemies in kingdom rush frontiers who possesses different type of unique abilities. This game has over 40 types of achievements which will just help you to love this game even more. Different types of skills can be taken to pursue the game. You can choose three difficulty level in this game . The most amazing things are fights with bosses. Boss fights are awesome in this game. You can even study about your enemies to know their strengths and their weakness. An Arsenal of Elite towers 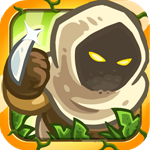