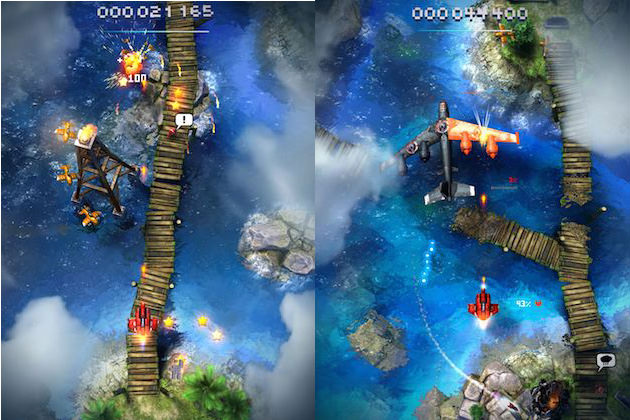 I am pretty sure that you have played this plane game on Nokia’s Symbian handset. This is one of the best plane games available for handheld devices. I used to play this a lot, so I can not skip this one. It offers an amazing sidescrolling shooter game experience with new social gameplay element. It has all the features like before but with more modernized and more bolder. In this game you will face more beautiful levels with amazing missions to complete, you will be facing some extreme boss battles. You will be amazed to know that you will be able to upgrade your shields, missiles, lasers, mega-bombs, and magnets. There are always brand new tournaments so that you fight against other players. Just get in the cockpit and fly now. One of the best plane flying games available for the android.

This is an amazing plane shooting game for android. This legendary shooting game was available at the arcade shops and now it is available at android also. There are multiple planes with different power. This game has many boss fights which will surely make you smile. This amazing game is now available in multiplayer online mode. The best part of this game is that it is free t download. Upto four players can play this game simultaneously.

Play multiplayer online plane games with players around the world. In this game you will be dodging, attacking and flanking enemy planes in the air. It’s a great plane to plane with your friends in online.

This is a helicopter playing game where you will be controlling a chopper. This is a realistic combat helicopter operation simulator game. From the name, you should have the idea of the game. You will be sitting on the pilot’s sit and fight the fierce air combats via flying one of the most hardcore choppers in the world.

This is a funny plane game where you are literally a dog who knows how to fly a plane. You will be fighting with enemies and try to survive. This has amazing sounds and funny gameplay. It’s funny and it’s addictive.

This game was introduced to Android at 2012. It was a staff pick. It is basically a strategy plane games available for the phones and tablets. It was first introduced at iPhone and became very famous. You can play this game in either survival or campaign mode

This is a funny android game where you have to draw paths thus the airplanes don’t collide with each other. This might sound like an easy task but it is actually fun to do it. There are online leaderboards which will encourage you t score more.

This is one of the most downloaded air fight game. You will be a helicopter pilot in this game and you will be participating in different combat missions on the world. There are different types of helicopters to choose from and you will be able to chose them upon their characteristics. This is a super optimized plane game for the Android tablet.

This is a console quality 3D game based on real satellite Imaging It has vibrant 3D graphics which will definitely put your mod up. There are new and upgradable equipment and mission along with improved graphics. The sound and gameplay are so advanced that you will definitely fall in love with this game. This is one of the best android plane games available.

5 Funny Multiplayer Games You Can Play With Your Chromecast