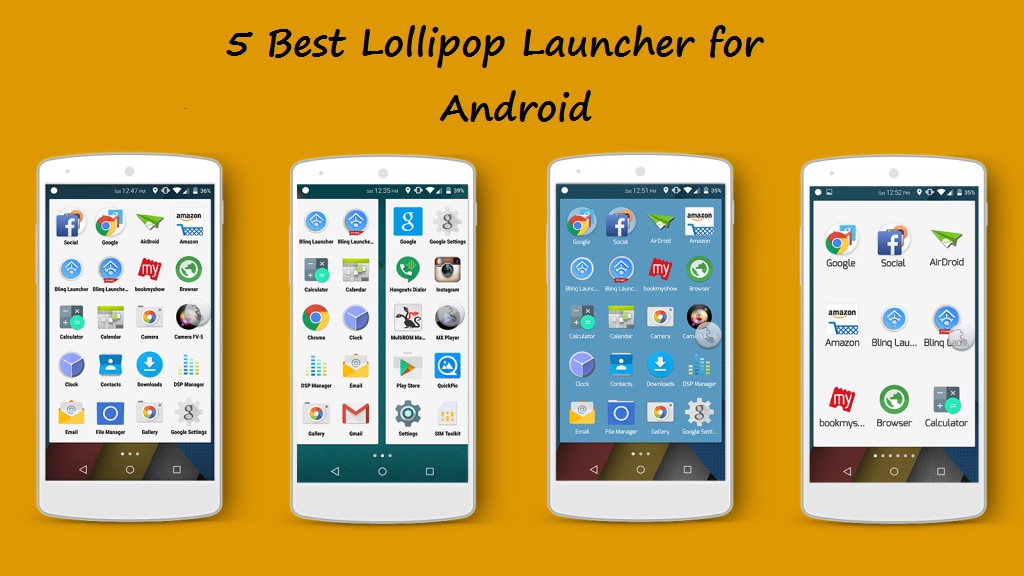 Android’s latest theme lollipop is one of the best and beautiful interfaces of the history of android. It’s beautiful interface is making us falling in love with android again and again. All the new handset devices are getting lollipop update while some of the old handsets are not. It might be disappointing for those people but there are ways to make your android look like an lollipop running android. We have to thank the third party developers for there effort to make lollipop launcher for our outdated handsets or tablets. These third party developers are making awesome launchers to give us the feel of using lollipop. Today we are going to post some of those launchers which looks like lollipop OS. Android lollipop is known for it’s material design. It has a whole new different icons with new animations and new notification bar.

These launchers will make smile on your face. SO you don’t have to worry about having lollipop update or not. Let’s see those awesome launchers now.

It has a materialistic design which is like the lollipop OS. It’s material UI is like the original Android 5.0 . It allows you to create your own gesture , customization. It doesn’t matter whether using what OS but you can have the android lollipop theme. It’s totally free for use and you can download it from Google Playstore.

KK launcher is a very popular launcher for android. It has different types of theme support including material UI design. You can customize the icons and themes. It has almost 20+ unique themes and features where material UI is one of them. You can choose that material UI theme which will give you the feeling of using lollipop. This is a very good launcher and it is free to use. Head over to playstore or follow the link below to download KK launcher.

I guess you are still looking for lollipop launcher and you have came to the right place. L Launcher is a very customizable launcher which allows you to customize almost everything. One of the biggest pro pf this app is that it does not feature ads. It helps you to get the feelings of Android 5.0 lollipop experience with this beautiful L Luncher. It is based on Android 5.0 lolipop launcher and it is free to use.

Action Launcher 3 is popular for it’s own design and combination of materialistic UI. It is the perfect lollipop launcher you can ever have. There is a quickdrawer where you can have the shortcuts of your selected apps. You can launch those app by clicking on those shortcuts. This is a very good option for us.

It’s quicktheme feature in the launcher allow you to blend the color of your wallpaper with the layout. It is enriched with many features from android 5.0 lollipop. It is available fore free in Playstore.